Yeah yeah, I know...it's only November 6th, and you might be asking, "WHY are you writing about the ever lovin' ELF?!?!"  I'll tell you why!  Because Thanksgiving is 3 weeks away & then a few days later, our little Elfie's gonna make his reappearance & I need to be prepared!

Our Elfie made his appearance a few years ago & the girls always get SO excited for his arrival.


Real life mom fail moment for a minute...10 years ago when Becca was around Izzy's age, she would come home & talk about this magical elf that was at her friends houses & it would move around every morning & it did fun things.  I was like, WHAT?!?!  In my defense, I was working full time, I didn't have "mom friends" that could explain this to me & Pinterest hadn't been invented yet, so...she never got an elf. :-(  Fast forward to 2012 and POOF, an Elf arrives!  Hooray!  It wasn't until later as we're placing this elf all around the house that it finally hit me!  THIS was what Bec was talking about all those years ago!  In that second, I was like, "Oh my gosh, I'm SO sorry!  THIS was what you asked me about 10 years ago!!!"  Needless to say, it was definitely a major headslap moment!


It seems like every year, we stand around each night in December with an elf in our hands, trying to figure out where to put him before we go to bed.  Those days are now over!  I finally got with the program & created a printable calendar cheat sheet with Elfie ideas for every day! 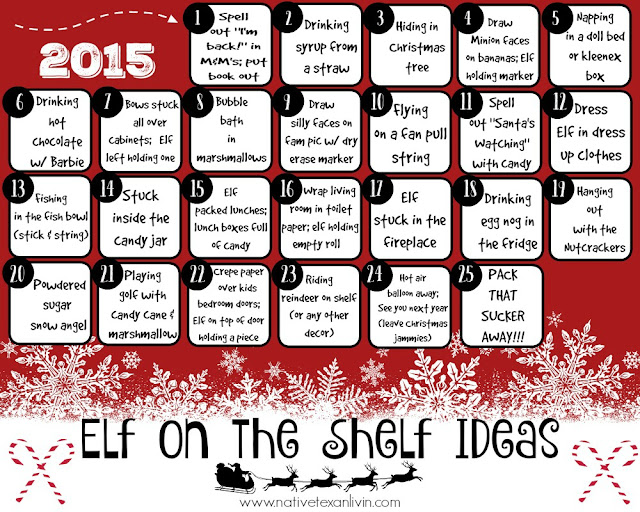 Here's a better breakdown of the calendar... 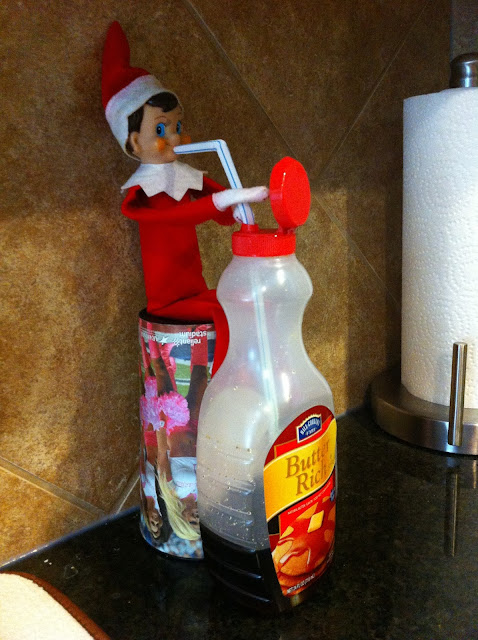 3.   Place elf somewhere in the Christmas tree peeking out at the kids.
4.   Draw Minion faces on bananas, leave elf in the fruit bowl holding the marker.
5.   Make a bed out of a kleenex with a kleenex blankie or tuck him into a doll bed.
6.   Fill up a mug with marshmallows & 2 straws. Place Elf & Barbie with straws at their mouths.
7.   Stick gift bows all over kitchen cabinets. Elf caught with a bow in his hands.
8.   Fill a mug or bowl with marshmallows & let Elf relax. Maybe make a hair turban! ;-) 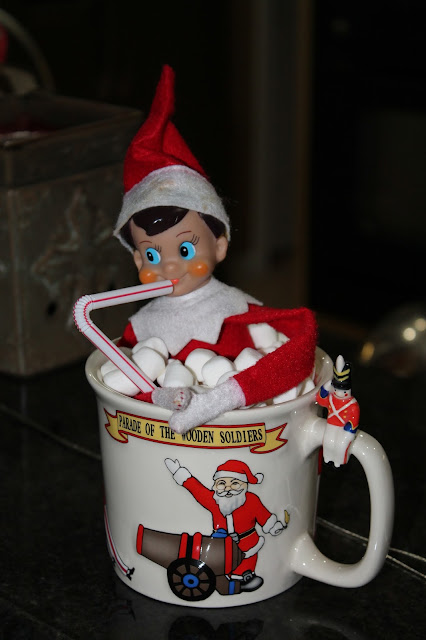 9.   Draw mustaches, glasses, etc on a pic with a dry erase marker. Elf left holding the marker.
10. Attach Elf to the fan pull string like he's flying.
11. Spell out "Santa's Watching" in M&M's. Elf sitting with M&M's in lap.
12. Dress up your Elf in doll clothes.
13. Set up Elf over a fish tank. Elf holding a stick with a string dangling into the fish tank.
14. Stuff the Elf into a glass jar full of candy (then the kids can't eat candy all day!)
15. Elf on counter next to open lunch boxes that are FULL of candy!
16. Toilet paper your living room! Leave the empty roll in the tree & Elf holding the end of the TP! 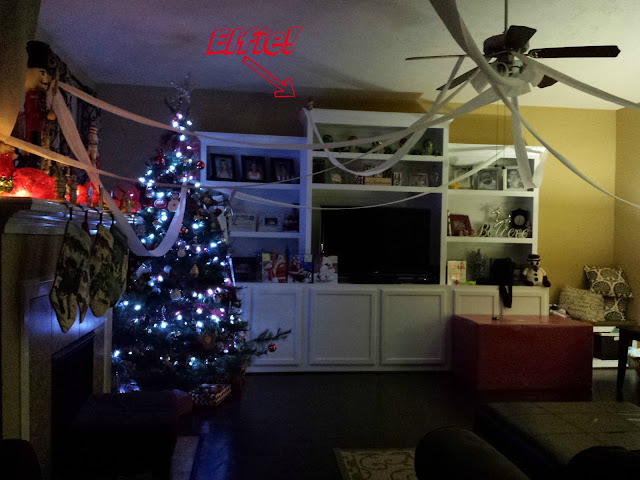 17. Stick Elf in the fireplace looking out at everyone.
18. Set Elf up in the fridge with a straw in a bottle of milk or eggnog.
19. Place Elf among Nutcrackers (or any other decor you have) 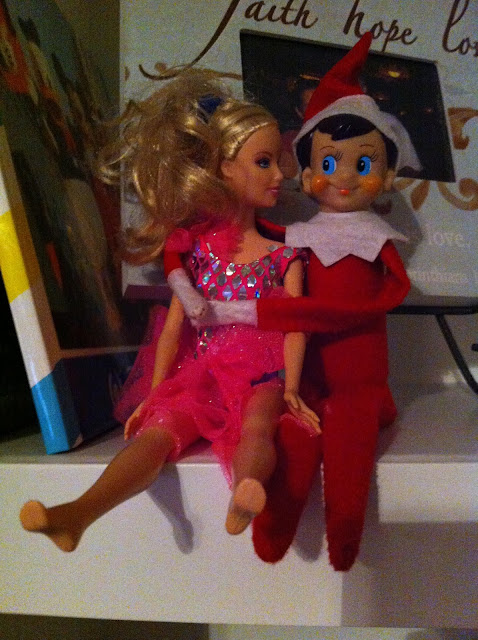 20. Make a powdered sugar snow angel on the counter.
21. Attach a candy cane to Elf hands & a marshmallow by the candy cane as if golfing.
22. Tape crepe paper over kids doors. Attach Elf above the door holding a piece of crepe paper.
23. Place Elf on top of a Reindeer (or other decor) like it's riding it.
24. Make a Hot Air balloon with a balloon covered with a bandana, or something round that you can attach to ceiling with a tack or tape. Make a small basket from a solo cup (or similar) & string. Elf is out of the way for Christmas Eve festivities. Elf leaves Christmas jammies for the kids this last morning to wear that night for Santa!  Kids say goodbye!
25. Do it QUICK...PUT THE ELF AWAY BEFORE KIDS WAKE UP!!!

Side Note:
If I'm hosting my family for Christmas Eve or if I'm hosting a party in general, I may switch up my schedule to make sure Elfie is out of the way in case other people get the urge to touch him.  We don't want him losing his magic!


And PLEASE for the sake of your kids & Christmas Magic.......PUT THE ELF AWAY!
I "put Elfie away" last year in my nightstand & was gonna go back to box him up later.  I forgot & Maggie went digging & found him!  She ran out telling me Elfie was back!  I realized immediately what had happened & while she was telling the other kids what she found, I snuck it out of the drawer.  Poor thing just looked like she made it up when she & the other kids went to find it again! :-(  I just told her Elfie was probably checking in to make sure they were behaving! :-)


My kids were really sad thinking about Elfie leaving last year, so thinking ahead, I ordered these plush versions of the Elf that are touchable!  We got a boy & a girl and they were left wrapped under the tree from Elfie! :-)  These elves are actually meant to be held & says so on the packaging.  For whatever reason, other kids at our school will bring elves to school in December, so now my kids can bring these!


I'm really excited to use the calendar this year!  Please do yourself a favor & print this 2015 Elf on the Shelf calendar to make your life a heck of a lot easier.  It's not like we don't have enough to think about this time of year, but throw an Elf into the mix & forget it!

Posted by Lauren Watson at 7:08 AM

Email ThisBlogThis!Share to TwitterShare to FacebookShare to Pinterest
Labels: Christmas, Elf on the Shelf, printables 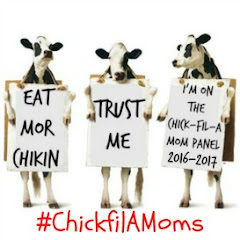